Are You Manipulative in Recovery?

Emotional extortion. Distortion of the facts. Emotional exploitation. In active addiction, most people stop at nothing to get what they feel they need in the moment. Whether it is money, drugs, food, or shelter, most people in recovery report that when they were actively using drugs and alcohol, they did whatever they felt was necessary to force other people to bend to their will in recovery.

Are you being manipulative in how you get people to see your side, support you, or otherwise give you what you want out of recovery? 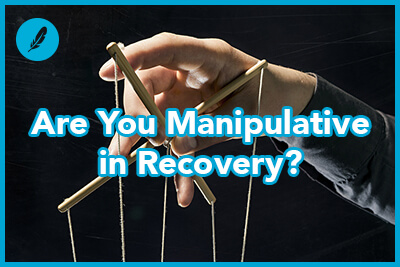 Here are just a few of the ways you may be engaging in destructive behavior patterns that are holding you back more than helping you:

Seeking a sense of superiority: By making others feel inferior, you feel superior in a given situation. This may be accomplished by ridiculing others, being outright mean or aggressive, or ignoring them when they are speaking. Though this can work in the moment to gain the outcome you hope for, it often leads to a loss of respect from all who hear or see you be abusive of others verbally.

Emotional bribery: If you have either promised or implied that you would support someone else or give them something they want (including your friendship or professional connection) if they do what you want them to do, you have engaged in emotional extortion or emotional bribery. This, too, may work in the moment but only with some people, and it may unintentionally serve to alienate you from people who genuinely want to help you in a more positive way and see you do well.

Dishonesty: When you purposefully omit facts or provide only partial facts to distort the truth of a situation when arguing for a choice in your favor, you are not giving the other person all the information they need to make a fair and informed decision. If you are doing this purposefully and in an attempt to control their response, you are being deceptive, a fact that, when found out, will cause people to view you as untrustworthy in general.

Playing the victim: If you are often characterizing yourself as the victim of another person, a partner, a government agency, or circumstance in order to convince other people to give you money or something else you want or need, you are playing the victim. The fact is that everyone plays a role in their circumstance, and though it sometimes happens that you may be unfairly targeted by someone, it is not the case in every single situation you don’t like. Continually “crying wolf” can mean that there is no one there for you when you are truly in crisis – not a good place to be in recovery.

It is very hard to stay sober and build a strong support network when you regularly engage in manipulative behaviors. Not only does it make it difficult to build authentic connections with other people and create functional relationships, it can also put you at risk of relapse in recovery by:

Are you struggling with interpersonal relationships and getting your needs met in recovery? Is it time to get honest with the help and support of a substance abuse treatment professional?