All drugs, whether legally prescribed, over-the-counter medications, or illicit recreational substances, have side effects on the body. Whenever a drug is used medically, an effort is made to balance the risk of side effects with the perceived benefit of the drug as a treatment for mental or physical conditions. However, this balance is rarely considered in the case of recreational drug abuse.

Ketamine has continued to gain popularity as a recreational drug, and it brings a high level of health risk, including overdose. In addition, use or abuse of this drug can cause uncomfortable or severe side effects and lead to long-term issues that can diminish an individual’s quality of life and even lead to death.

Ketamine was developed for use as an anesthetic, especially in veterinary medicine, which is why it is sometimes referred to as cat valium or horse tranquilizer. As such, it is only meant for use in hospitals or veterinary practices. It has also gained a reputation for being able to help with depression, and it has been used off-label for this purpose. In fact, there are now a number of uses for which the drug is used medically, on top of its original intent as an anesthetic, as explained by Medical News Today:

In addition, ketamine has become an illicit recreational drug of abuse. Its abilities to make a person feel disconnected from the body and create hallucinations have made it popular as a club drug. Also, the facts that it can cause blackout and catatonia (coupled with its colorless, odorless, and flavorless nature) have led to its use as a date rape drug.

Ready to leave addiction behind?

As with any drug, ketamine use can produce a wide range of side effects in the short-term and long-term. Physically, these include:

Bladder issues and severe long-term effects particularly involve those who use ketamine chronically, which implicates people who are abusing the drug recreationally as noted in the British Journal of Clinical Pharmacology. Liver damage has also been demonstrated to occur. In case of overdose by ketamine, dangerously slow or stopped breathing is most often implicated in deaths.

The National Institute on Drug Abuse indicates that the following psychological symptoms can occur:

Individuals who abuse ketamine regularly may also begin to experience psychosis, anxiety, and a range of other mental health disorders, including addiction. 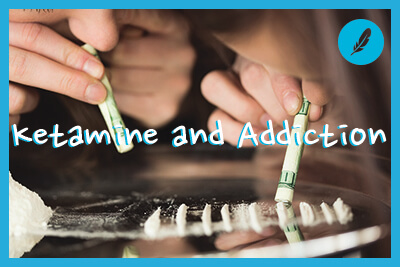 Like many drugs used for recreation, including club drugs, ketamine can create a state of euphoria. Through its effects on the dopamine and GABA chemical pathways in the brain, it helps to create a sense of extreme joy and pleasure along with its hallucinatory and dissociative experiences. These systems are also implicated in the development of addiction. This, as explained by an article from Brain Research Bulletin, can contribute to the development of addiction to ketamine.

Addiction can be a challenge in treating ketamine abuse because it makes it more difficult for the person to overcome triggers and cravings and avoid abusing the drug. However, stopping ketamine use as quickly as possible is vital to prevent the various short-term and long-term health effects from developing, either in cases of prolonged legitimate medical use or recreational ketamine abuse.

Reversing the Damage of Ketamine Abuse 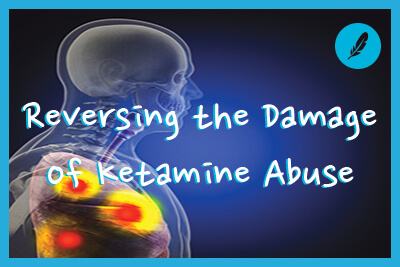 There is a sense of urgency in stopping chronic or regular ketamine use and abuse because of the degrees of disease that can develop from using it. The longer the use or abuse continues, the greater the damage to organ systems and neural pathways and the greater chance there is for permanent organ or brain damage.

As such, stopping ketamine abuse once this damage has been done will not necessarily be able to reverse it. Kidneys can shut down due to ketamine damage, and brain damage may be irreversible. Some individuals have enough damage to brain pathways to develop hallucinatory persisting perception disorder, or HPPD, which leads to long-term or permanent visual or auditory disturbances, as described in a study from the Utrecht University Repository.

Because ketamine can cause permanent physical or mental disease, the earlier ketamine abuse is stopped, the more likely it is that the individual can avoid or minimize the damage and its effect on quality of life.

Call now for a FREE insurance and payment consultation.
Contact Us Today

Because of its addictive potential, ketamine abuse is more likely to be able to be stopped if the person enters a certified, research-based drug addiction treatment program. From detox to treatment and on to recovery, the experts in these programs have experience working with individuals who abuse ketamine.

Professionals at a respectable treatment program can address the individual’s specific needs around treatment, including the unique side effect profile of ketamine and the person’s particular physical and mental attributes. This is done through a variety of treatments, such as:

The goal of the program is to help the individual learn to manage the addiction to ketamine, providing the best chance for the individual to move forward into long-term abstinence and recovery.