Khat Withdrawal Symptoms and Side Effects 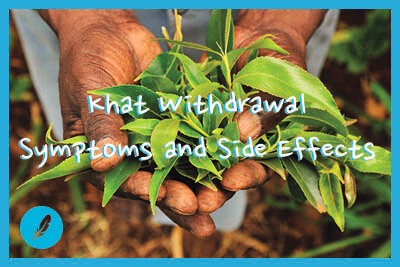 Khat (Catha edulis) is a plant that grows in the Middle East as well as in certain parts of Africa. The people native to the areas where the plant grows use the leaves, shoots, and twigs in a manner that is similar to the way chewing tobacco is used in other countries. In addition, the products of the plant are ground up and made into a tea or smoked.

The use of khat is ingrained in many of the cultures of these countries, and people often use the drug for its stimulant effects. In fact, in many regions, khat is used in a similar manner to how coffee is used in the US; however, the drug has potentially more serious effects than caffeine.

The active components in the plant include the substances cathine (d-norpseudoephedrine) and cathinone (β-keto-amphetamine), which produce effects similar to amphetamines. In the United States, the DEA (Drug Enforcement Agency) classifies both of these as controlled substances. Cathine is listed as a Schedule IV substance, indicating that it can be obtained legally with a prescription, whereas cathinone is classified in the Schedule I category, indicating that it cannot be legally obtained without special permissions from the government. Thus, due to the presence of cathinone in the khat plant, the plant would automatically be considered to be illegal to obtain in the US.

The use of khat in the US most likely occurs among individuals who have emigrated from countries where the drug is indigenous. Certain online sites have also advertised the drug as being relatively safe yet providing effects similar to popular stimulant drugs of abuse. This may result in some individuals illegally obtaining the drug and using it for its psychoactive effects.

Ready to leave addiction behind?

Because the drug is quite popular in areas where the plant is indigenous, and many individuals may continue to use the drug when they immigrate to other countries, including the US, there is relatively broad literature on the effects of khat. These include:

There have been scattered research studies in the past that have indicated that tolerance does develop to the drug and that discontinuation of khat is associated with the development of withdrawal symptoms that are similar to withdrawal symptoms that occur when individuals discontinue other types of stimulants. Two larger studies of individuals who have chronically used khat in areas were the drug is indigenous indicate that there is most likely an identifiable syndrome of physical dependence on the drug, although organizations like NIDA have not yet formally listed the symptoms.

A study reported in the Journal of Ethnopharmacology in 2013 investigated the use of khat in a sample of 204 regular khat chewers who were recruited during random visits to sites where sales of the drug occurred. All of the participants were in Yemen and consisted of both males and females. The findings are outlined below.

A 2017 study reported in the journal BMC Psychiatry investigated physical dependence on khat in a large sample of university undergraduate students (651 students) in Ethiopia. Approximately three-quarters of the sample had been chewing khat prior to attending the university, and the rest of the students began using the drug when they began attending school in order to improve their academic performance or for social purposes. The major symptoms of withdrawal in the sample associated with discontinuing the drug included:

Despite some organizations like NIDA suggesting that it is unclear whether the chronic use of khat can result in the development of physical dependence (tolerance and withdrawal), the research suggests that chronic use of khat does lead to a mild syndrome of physical dependence that includes withdrawal symptoms that are similar to those associated with withdrawal from other stimulant drugs like amphetamine. It appears that these symptoms are primarily emotional in nature and do not appear to be significantly threatening to the health of the individuals who reported them, although certainly individuals who have other co-occurring psychological disorders may be at significant risk for issues with dehydration or self-harm.

It also appears that the withdrawal syndrome associated with discontinuing khat is relatively brief and mild. Most individuals are able to manage it without significant trouble, although many of the individuals do report that the withdrawal symptoms caused them significant distress and impairment in their functioning. Abuse of khat and the withdrawal syndrome associated with discontinuing it appears to be consistent with the diagnostic criteria developed by the American Psychiatric Association for a stimulant use disorder and for stimulant withdrawal.

At the time of this writing, there does not appear to be evidence that a reliable overall general timeline describing the progression of the withdrawal symptom associated with discontinuing khat has been developed. However, because the available research suggests that the withdrawal symptoms are relatively brief and somewhat variable, it may not be necessary to produce a formal timeline to guide clinicians in helping individuals who may have more serious and problematic issues associated with khat withdrawal. Most of the participants in the studies mentioned in this article reported that their withdrawal symptoms did cause them significant distress, and it may be prudent for individuals attempting to discontinue use of the drug to consult with a physician. Based on the available research, it does not appear that a formal inpatient withdrawal management program for these individuals (medical detox) should be a necessary component of recovery. In some cases, individuals with serious issues, such as co-occurring mental health disorders, may require inpatient treatment when they discontinue the drug.

Treatment for a stimulant use disorder as a result of khat abuse should attempt to follow the general overall plan used in addressing these conditions and should also adjust the blueprint to fit the needs of the individual in question. This includes making alterations in treatment approaches based on the cultural background of the individual being treated. It is important to maintain an effective approach to dealing with a substance use disorder while being respectful of the individual’s culture and belief system.