How Long Do Bath Salts Stay in Your System? 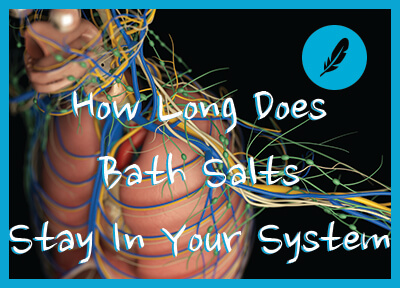 The drugs often referred to as bath salts are composed of a synthetic stimulant drug known as MDPV (chemically: 3, 4-Methylenedioxypyrovalerone). Bath salts may also contain the similar substances Mephedrone (4-Methyl-N-methylcathinone) or Methylone (3, 4-Methylenedioxy-N-methylcathinone). These drugs are all classified as synthetic cathinones and related to the compounds that occur in the khat plant (particularly the cathinones). These drugs have mild stimulant effects and are often used in East Africa and the Middle East.

The effects of bath salts are reported to be similar to the effects of MDMA (ecstasy), certain amphetamines, and cocaine. Until MDPV and other compounds being passed off as bath salts were regulated by the Drug Enforcement Administration (DEA), they could be found at selected head shops and gas stations that sold various types of drug paraphernalia. These drugs were often marketed as legal alternatives to ecstasy and had numerous street names, including MCAT, meow, vanilla sky, cloud nine, lunar wave, red dove, scar face, and white lightening.

Initially, MDPV and other similar drugs labeled as “bath salts” were manufactured in China and came in the form of a powder or tablets.

When available commercially, they were often labeled with disclaimers like “not for human consumption” on the packages. They were typically sold in packages containing 50 mg to 500 mg of the drug in addition to other substances. For instance, a research study published in the journal Drug and Alcohol Dependence in 2016 found that drugs being passed off as ecstasy actually contained a fair percentage of bath salts.

The first seizure of MDPV in the US by DEA agents appears to have occurred in 2008. In 2010, the DEA declared MDPV and related substances as being “a drug of concern” indicating that due to significant abuse of the drug and reports of deleterious effects, the DEA was considering taking steps to ban its use. In 2011, several states outlawed these drugs, and in 2012, President Obama signed the Food and Drug Administration Safety and Innovation Act – Synthetic Drugs, effectively banning many of these major substances, although producers of these drugs slightly altered the chemical formula of many of them in an attempt to legally import them into the United States.

Drugs classified as bath salts are typically categorized as Schedule I controlled substances by the DEA. This indicates that they had no known medicinal value. Their possession is illegal except in very special cases where researchers have obtained government permission.

High doses of bath salts have been known to cause extreme anxiety and even psychosis. Tolerance most likely develops in individuals who use bath salts; however, it is still not certain if true physical dependence develops as a result of chronic abuse. Most of the online reports suggest that bath salts are “strongly addictive.”

There is a litany of effects that have been reported as a result of using bath salts. Some of these include:

There are scattered reports of overdoses and even potential fatalities as a result of overdose on bath salts. Because these drugs are manufactured illicitly, often overseas, there is no quality control process, and they can contain widely different doses and ingredients.

The half-lives of MDPV, mephedrone, and methylone do not seem to be well described, but research indicates that these drugs are eliminated quickly from the body, probably indicating a half-life of anywhere from one hour to a few hours in most individuals, depending on the dosage taken. Research also indicates that these drugs are undetectable in routine urine and blood screenings.

Comprehensive urine, blood or hair analysis needs to be performed, and techniques using more complex and sophisticated techniques like gas chromatography-mass-spectrometry are often required. Based on research findings, it appears that the detection window for blood and urine tests is probably limited to 48-72 hours; however, hair analysis may be able to detect the presence of these drugs for up to 90 days.