Spice Overdose, Withdrawal, and Side Effects

Table of contents
The term Spice is the street name for a number of drugs that are classified as synthetic cannabinoids. These drugs are mind-altering chemicals that are synthetically produced and marketed as being safe and legal alternatives to marijuana for individuals who cannot buy marijuana where it is legally available, who cannot afford real cannabis products, or for younger individuals who could not legally purchase marijuana under any circumstances.

According to the National Institute on Drug Abuse (NIDA), these products are often sprayed on dried material or come in liquid form, and they are typically smoked or baked into edibles. The majority of users of these substances are adolescents or young adults. These products represent potentially dangerous products because their manufacturers are not supervised in any manner; the actual components that are in packages labeled as Spice or other names, like K2, may or may not be consistent; and many of these substances are known to be toxic. These substances can greatly vary in their composition from package to package. Use of these substances peaked in 2013 and has fallen since, but their use is still problematic. 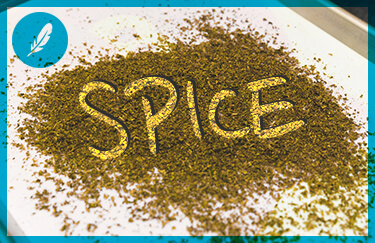 Manufacturers attempt to slightly alter the chemical composition of the substances once a particular chemical formula has been banned. The United States Drug Enforcement Administration (DEA) currently lists numerous different synthetic cannabinoids as Schedule I controlled substances, and many states have attempted to ban general forms of these substances. Substances I substances can only be legally obtained with special permissions from the government, and they are often only used for research purposes.

Side Effects of Spice

The marketing ploy used for synthetic cannabinoids is to present them as being approximate reproductions of cannabis products. In reality, since there are so many different substances and they are synthetic in nature, they at best mimic euphoric feelings associated with a number of drugs. The DEA, NIDA, and the Substance Abuse and Mental Health Services Administration (SAMHSA) report that the initial effects may include:

Because there is quite a bit of variability in the different chemicals that are marketed as Spice, the potential effects that may occur in any single case can be quite variable. In addition, synthetic cannabinoid use over a lengthy period of time results in the development of a more severe syndrome of physical dependence than associated with actual cannabis products.

A review article published in the International Journal of Psychopharmacology included information regarding the syndrome of physical dependence that can occur in individuals who use synthetic cannabinoids. The article discussed a number of case studies of individuals who had chronically abused synthetic cannabinoids and found that a small percentage of the sample demonstrated physical dependence on them (about 9 percent of the sample). Again, it should be understood that because there is quite a bit of variability in the actual chemicals that can be marketed as Spice or others synthetic cannabinoids, individual cases may vary significantly in their presentation.

The major symptoms of withdrawal outlined in the article were:

The article outlined a general withdrawal timeline based on the case studies that may also be quite variable:

It should also be noted that individuals who use synthetic cannabinoids are also prone to using other drugs, including alcohol, prescription medications, and other illicit drugs. Individuals who chronically abuse multiple drugs can develop idiosyncratic reactions, side effects, and withdrawal syndromes.

There is no formal treatment protocol for withdrawal from synthetic cannabinoids, and typically, treatment is based on the symptoms presented by the individual. IV fluids and benzodiazepines may be useful for the management of anxiety and any potential seizures that may result as well as the management of other specific symptoms. Individuals who become psychotic may be administered antipsychotic medications. Issues with headache, nausea, vomiting, etc., can be treated with medications to address those symptoms.

The Centers for Disease Control and Prevention (CDC) has compiled a number of cases of overdose involving synthetic cannabinoids, including Spice, indicating that most individuals who overdosed on these drugs were young adult males who had smoked the drug intentionally. Individuals who had used synthetic cannabinoids with other drugs were most likely to use alcohol, marijuana, or benzodiazepines.

In addition, there been a number of news reports regarding large numbers of individuals who had been victims of “synthetic cannabinoid poisoning” as a result of using these drugs. For example, one article in the Los Angeles Times documented the effects of the use of synthetic cannabinoids on low-income individuals, and one article in the New York Daily News reported poisoning and overdose effects on a group of individuals using synthetic cannabinoids. Incidents like these are reminders of the potential dangers of using drugs that are manufactured in environments where there is no supervision or no formal standards applied.

Because of the variability in the chemicals that are actually in packages of Spice or K2, the specific types of symptoms that are observed in an overdose will also be variable. Based on data from the CDC, it appears that some symptoms were commonly associated with an overdose on synthetic cannabinoids.

Small numbers of individuals may suffer kidney damage, increased white blood cell count, and rhabdomyolysis (muscle tissue breakdown and the release of proteins in the bloodstream) as a result of overdosing on synthetic cannabinoids like Spice. Chronic use of synthetic cannabinoids may also result in significant damage to the brain in areas associated with movement, planning, and coordinating movements with intentions.

Synthetic cannabinoids like Spice and K2 are often marketed as safe alternatives to cannabis products; however, they represent very dangerous substances that can have varying effects. Because there is no consistency in the chemicals that occur in packages labeled as K2 or Spice, the actual effects one achieves as a result of use may be quite different.