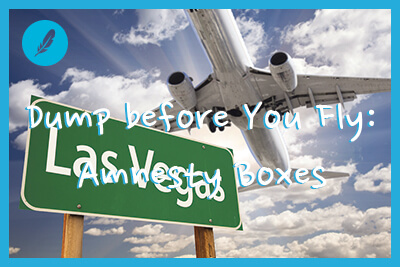 For tourists who wake up in a blur and rush to the airport without checking their pockets, there is a last minute dump stop available to them in the form of so-called “amnesty boxes” at the Las Vegas airport. Because marijuana is legal for recreational use in Nevada but not in most other states in the country, the 10 green boxes are the city’s attempt to help visitors avoid being detained and potentially charged by federal transportation agents at security checkpoints.

The boxes are reportedly bolted to the ground, clearly marked as “Disposal for Prescription and Recreational Drugs,” and significantly different than nearby trash cans. The bins are for the purposes of taking in only legal substances; they are not designed to be a safe disposal point for needles or street drugs. Though the first in the state, they are not the first in the country; two of Colorado’s airports have similar boxes. However, because Las Vegas sees more than 40 million passengers every year, it is likely that these boxes will fill up fast. In fact, another 10 boxes are planned for installation in the coming months and more are a possibility. An airport-owned car rental location also has three boxes stationed outside.

Currently, a contractor is slated to empty the boxes multiple times per week with a schedule that is expected to be adjusted as it becomes clear how frequently they will be utilized by passengers.

Christine Crews is an airport spokesperson. She says: “The amnesty boxes are offered as a way to help people comply with this ordinance.”

As of July 1, 2017, marijuana has been legal throughout Nevada for recreational use, and the public response has been far larger than expected, even though use of the drug is banned in public spaces, including casinos, hotels, and the Strip. The drug is only legal for use among adults over the age of 21 in private homes, but it is doubtful that tourists visiting the city are deterred by these restrictions.

What do you think of the amnesty boxes at airports? For many people, they are one of many little changes that signify the shift caused by the legalization of marijuana across the state. For some, it is a welcome change, but for many families with a loved one living in active addiction, the changes are worrisome. It is one more way in which substances have infiltrated daily life. It is not just beer and alcohol offered at every restaurant or billboards promoting drinking and partying at every turn; now, there are boxes where people dump drugs dotting the airport, the smell of marijuana all over the place despite the ban, and one more substance to potentially be faced with at every turn.

Easy access to substances, living in an environment that is permissive of drug use, and frequent temptations to drink or get high are all risk factors for the development of an addiction as well as risk factors for relapse. The good news is that you can build a solid foundation at a comprehensive drug addiction treatment program. With a strong footing in recovery, no matter what drugs are legalized or how often people are drinking and getting high, you will have the coping mechanisms you need to remain sober.

For example, when you find yourself struggling with cravings for drugs and alcohol and are on the brink of relapse, you can:

How do you manage cravings and the temptation to drink or get high in recovery? Has legalized recreational marijuana triggered you since July 1?