Meth: The Return of the Nevada Killer Drug

Meth: The Return of the Nevada Killer Drug 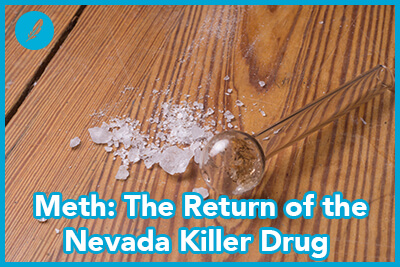 Is methamphetamine abuse, ADHD medication abuse, or other stimulant abuse an ongoing issue for someone you love?

Why People Do It

Stimulant drugs have the opposite effect on users compared to heroin and opiate painkillers. While heroin is a depressant, slowing down heart rate and breathing rate and causing the user to “nod out” like they are asleep, stimulant drugs speed everything up. Energy, metabolism, and heart and breathing rates increase. Rather than sitting still and losing hours of time, methamphetamine users feel like they can party longer, drink longer, or accomplish more on their to-do list.

In fact, while there are many who use stimulant drugs for the purposes of being able to drink more without feeling drunk or in combination with other drugs while socializing, many use the drug solely for the purpose of getting things done. In fact, ADHD medications that are prescribed to help people who struggle with focus to keep their “brain in the game” are often diverted and used by people who are not diagnosed with ADHD. The result is hyper focus and the feeling that it is unnecessary to either eat or sleep. This feeling, like the feeling of being high on heroin, can be addictive. While people struggling with this type of stimulant addiction may look extremely successful on the outside, addiction is actually eating away at their foundation.

Just like with opiate addiction, what begins with a doctor in the form of a prescription for a legitimate medication for a legitimate purpose (e.g., painkillers to treat pain or stimulants to treat a neurobiological disorder like ADHD) can turn into a problem. When it becomes too difficult or too expensive to get more pills, many turn to the streets for a viable substitute if they can’t find the pills on the black market, and meth sold on the street is even less expensive than heroin.

Both substances are manufactured in Mexico and transported across the border by air, sea, and land through border security checks. Thousands of lives are lost every year in this cutthroat industry, and a number of innocent people die to get these drugs, strong and cheap, into the hands of Americans.

Keith Carter is the deputy director of the Nevada High Intensity Drug Trafficking Area program. Says Carter: “The No. 1 drug seized by all of our task forces is meth. The meth being manufactured in Mexico is very high quality meth, and very potent.”

Though many stimulant medications are diverted to the black market just like painkillers are, and it is possible to make methamphetamine in a lab here in the US, it is far easier and less expensive to buy stimulant drugs from Mexico, adding another layer of danger and community impact to the problem.

Does your insurance cover treatment for meth addiction?

If someone you love is living with a stimulant addiction, either due to recreational use or in an effort to be more productive at work or school, it is not always easy to identify the problem or to help them connect with the treatment they need. The good news is that there are usually few physiological withdrawal symptoms associated with detox from stimulant drug use, but the tough news is that the psychological addiction and cravings can be severe, both in the first weeks of recovery and then again periodically throughout the first few years.

It can take time to find stability in sobriety when stimulant drugs are the substance of choice, and the process starts with taking the first step into treatment. Are you ready to help your loved one start the healing process?