According to the National Institute on Drug Abuse, bath salts are designer drugs, which means that they are synthetically manufactured in private laboratories and designed to produce specific psychoactive effects. These drugs contain a number of different psychoactive ingredients. The most common ingredient that is reported to occur in bath salts is a stimulant known as MDPV (methylenedioxypyrovalerone).

MDVP is a stimulant in the phenethylamine category and very similar to a chemical found in the khat plant from East Africa (cathinone) and to the stimulant drug methamphetamine. The khat plant is a shrub that is valued as a potential stimulant drug in East Africa and the Middle East. People in these countries chew the leaves of the shrub or make tea out of them, and khat is known to have some potential for abuse. 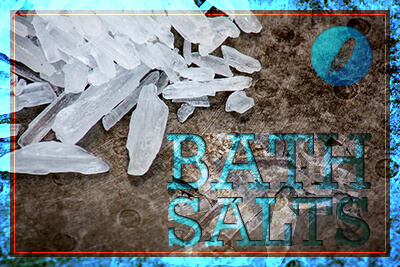 Bath salts have stimulant effects that are similar to the club drug MDMA and the drug methamphetamine (crystal meth). Other stimulant drugs that may be present in bath salts are pyrovalerone and mephedrone. All of these drugs are reported to have high potential for abuse and overdose.

Bath salts are generally described as being synthetic cathinones. MDPV, mephedrone, and pyrovalerone are all categorized as Schedule I controlled substances by the United States Drug Enforcement Administration. This indicates that the substances are believed to have no medicinal use, cannot be obtained legally, and have an extremely high potential for abuse and the development of psychological and/or physical dependence.

Use of bath salts has resulted in a number of instances where individuals have overdosed on the substance and required hospitalization. These drugs are stimulants that block the reuptake of the neurotransmitters dopamine and norepinephrine, and using significant amounts of these drugs can lead to dangerous and even fatal effects.

These drugs go by a number of street names, including flakka, vanilla sky, bloom, white lightning, white dove, zoom, blue silk, plant food, and plant fertilizer. Bath salts are manufactured overseas, and in their initial manufacture, there is very little supervision regarding what substances go into these designer drugs and what amounts of each substance are put in. They are extremely more dangerous and potent than the natural cathinones found in the khat plant.

An article in the New England Journal of Medicine listed the potential physical effects of using bath salts as:

The neurological and behavioral effects of bath salts are reported in the same article as potentially including:

*(a combination of severe confusion, being mentally disoriented, hyperactivity or lethargy, and experiencing psychotic behavior)

Obviously, the harmful cardiac effects due to exposure can be potentially fatal as can the development of seizures and swelling of the brain. In addition, individuals are at risk for brain damage or even death due to respiratory suppression as a result of brain swelling, seizures, or cardiac effects.

Research using animals investigating the abuse potential of synthetic cathinones has indicated that animals will compulsively self-administer these drugs in the same way they will self-administer very addictive drugs, such as heroin, cocaine, and methamphetamine. These findings suggest that these drugs produce significant cravings that are associated with changes in neurobiological pathways in individuals who abuse them.

Descriptive studies on individuals who have abused synthetic cathinones like bath salts have indicated that these individuals often develop very severe cravings for these drugs when they are not available. These cravings can result in a number of dysfunctional behaviors associated with attempts to procure and use bath salts. Cravings are also reinforced by the development of physical dependence. Individuals abusing bath salts develop tolerance very quickly and need to use more of the drug to get effects similar to the effects they got when they began taking it. This leads to an increased risk for serious effects as listed above.

There is little research outlining a timeline for withdrawal from synthetic cathinones. Withdrawal symptoms may include:

There are no medications that are designed to specifically address the withdrawal syndrome in individuals who have an abuse issue with bath salts. Benzodiazepines can be useful in addressing potential seizures and anxiety, whereas other medications can be useful in addressing specific symptoms. Individuals who have developed a substance use disorder as a result of abuse of bath salts should enroll in formal substance use disorder therapy that includes medical detox, psychotherapy, social support, and other interventions as needed.

Who Makes Bath Salts? Who Uses Them?

They are deliberately labeled in a manner to evade scrutiny from the authorities, such as having labels that state, “This substance is not for human consumption,” or labeled as being plant food. Nonetheless, these products were originally marketed as being legal analogues of cocaine, LSD, methamphetamine, and MDMA. The marketing of the drug as a type of MDMA made it particularly attractive to younger individuals, since MDMA is typically used by adolescents and young adults at raves or nightclubs.

People use these drugs for the extreme rush of energy they produce, extreme feelings of euphoria produced by the release of dopamine, increased sociability, and other related effects. The statistics on who uses these drugs are not well defined. The United States Department of Justice reports that the age range for individuals who uses bath salts appears to be quite broad, ranging from teenagers to individuals in their 40s. These individuals are likely seeking effects similar to the effects that are produced by other types of stimulants, including methamphetamine, MDMA, and cocaine. The method of use appears to be quite variable and includes taking the drug orally, snorting it, injecting it, or even smoking it.

According to the latest figures, the abuse of bath salts appears to have peaked. After quite a bit of publicity regarding fatalities and overdoses in states like Florida; the combination of efforts provided by local law enforcement agencies, governmental agencies, and educational programs; and even crackdowns in China on manufacturers of these drugs have resulted in them being less available to individuals in the United States. One potential source that verifies this notion is the American Association of Poison Control Centers, which has released figures for calls nationally across poison control centers concerning exposure to bath salts from 2009 through August 31, 2016:

Nonetheless, use of these drugs represents a potential serious danger. Anyone who is suspected of using bath salts should undergo a formal assessment by a licensed mental health professional. The assessment should include a full physical examination performed by a physician, a mental health examination, and a cognitive examination to determine the individual’s level of understanding and any potential neurological effects associated with the drug abuse. Treatment should be performed in a multidisciplinary environment where addiction medicine physicians, psychiatrists, therapists, and other professional healthcare workers participate in a group effort to assist the individual in recovery from the substance use disorder. Simply negotiating the withdrawal process and not engaging in a formal substance use disorder treatment program will not result in a successful recovery.