At the end of next year, Utah is slated to drop their legal driving limit from 0.08 percent blood alcohol content to 0.05 percent. While many experts across the country have long said that this was a move supported by research and suggested for optimum safety for innocent people on the roads, many view this as an anti-alcohol law rather than a pro-safety law simply because it is happening in Utah, a state with a high population of Mormons, who as a group, do not support the use of alcohol.

Needless to say, the American Beverage Institute (ABI), a trade group that lobbies on behalf of restaurants in Washington, DC is not happy with this move. Fearful that it will become a trend across the country and cause people to limit their alcohol intake, they are acting quickly to frame the legislative change to Nevadans negatively. Across the state, the trade group has taken out full page ads depicting a blonde white woman ostensibly having a mug shot made while holding a sign that gives identifying characteristics and says  CRIME: HAD ONE DRINK WITH DINNER. 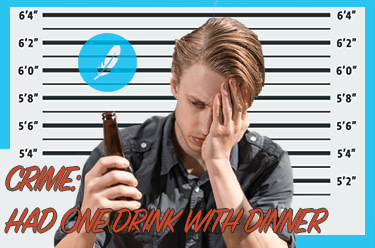 Underneath the photo, there is a statement letting people know that Utah has become the first state to drop the legal driving arrest threshold from 0.08 BAC to 0.05 BAC and warns that a single drink with dinner could put someone over the limit and potentially behind bars. Underneath the blurb in bold italics, the poster reads: “Time for Nevadans to rethink their vacation plans!”

“We think this is a mistake. It’s not based on science. It’s an anti-alcohol law, not a pro-safety law which is how they’re trying to cast it.  You’re more impaired driving talking on a hands-free cellphone than you are at 0.05.”

Proponents of the law point out that most other countries also have a 0.05 BAC legal threshold and that the United States is woefully behind the times. The goal is to lower the number of car accidents and protect innocent people.

The National Transportation Safety Board (NTSB) has long taken a stand supporting the lowering of the legal thresholds from 0.08 BAC to 0.05 BAC. They point out that studies done in other countries have demonstrated that lowering the threshold to 0.05 BAC had the effect of decreasing alcohol-related traffic accidents 8-18 percent. When extrapolated to US stats and facts, it is estimated that about 1,000-2,000 lives would be saved every year, untold numbers of injuries would be avoided, and billions of dollars in associated costs, including lost productivity, would be saved.

Though alcohol has been legal since the early 1900s, it has been increasingly identified as a deadly toxin and the underlying cause of a number of chronic and fatal diseases as well as the cause of deaths due to drunk driving, accident, homicide, suicide, and more. A study on highway crashes found that even those whose BAC was 0.01 were more likely to be responsible for deaths on the road compared to those who did not drink at all before driving.

For many, a drunk driving arrest is the wakeup call they needed to realize that their drinking had gone to an unsafe place, and many undergo treatment as a result of living through such an ordeal. If the BAC threshold were to be lowered, more people would be in this position, and perhaps more people who might have otherwise avoided detection for longer may come to realize that they cannot manage the problem alone and that treatment is a positive step forward.

Do you think that altering the BAC threshold in Utah was a good idea? How do you think it will affect Nevada residents? How, if at all, will changing laws in Utah impact your choice to drive over the border and visit?