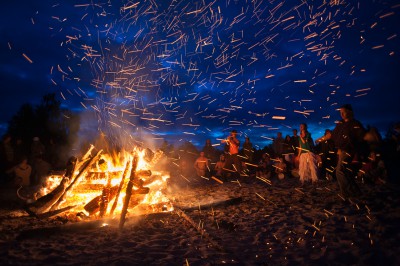 At the beginning of this month, as they have for years, tens of thousands of people braved the Nevada heat, dust storms, and even wildfires to attend Burning Man. Every year, the temporary city of Black Rock City is erected for the event in Nevada’s Black Rock desert, about 100 miles north of Reno. The event is known for its “anything goes” vibe, with events like oiled wrestling and a nude welcoming party – and copious drug use.

Although the perception of festival goers and the general public is that “anything goes” at Burning Man, that isn’t exactly true – at least, not as far as the law is concerned. In fact, there are a number of laws and law enforcement officers to enforce them in place at Burning Man with the goal of keeping the party safe and legal.

For instance, leveling human waste out on the playa where the festival takes place can result in a fine of hundreds of dollars. Nevada laws for indecent exposure can be enforced as well. That includes any public nudity, and it can end your time at the festival; charges can also mean that you are required to register as a sex offender for the rest of your life.

The festival promoters have even dedicated a section of the Burning Man website to informing festival attendees of all the potential misconceptions of the legalities that are relevant to the event and references the five different law enforcement agencies in and around the event. Use of drugs specifically is discussed – use of all drugs, including marijuana, which was recently legalized for recreational use in Nevada. The site makes it clear that use of narcotics is not allowed, and that means that marijuana use is not permitted at Burning Man as well.

But does that mean it won’t happen? Not likely. If you are in recovery, this is a serious consideration. The good news is that there are people who head to Burning Man and stay sober, and they support others in doing the same. Here’s what you need to know, no matter which side of the spectrum you are on.

Attorney General Jeff Sessions has made it clear that he is no fan of marijuana use and abuse. He has said that marijuana use was “only slightly less awful” than heroin dependence. He has repeatedly been quoted as saying that he thought the Ku Klux Klan was “OK until I found out they smoked pot” when discussing a case in which two Ku Klux Klan members were on trial in his state for murdering a black man by slitting his throat and hanging him from a tree.

Though Sessions swears the latter comment was a joke, he has made it abundantly clear that he is no fan of marijuana use and abuse, and has little intention of following in the footsteps of the Obama administration on the issue. That is, he is not necessarily going to stand by as states legalize marijuana for recreational use without intervention if states implement few limitations and restrictions (e.g., regarding youth use, interstate trafficking, drugged driving, etc.).

This month, said Sessions: “I’ve never felt that we should legalize marijuana. It doesn’t strike me that the country would be better if it’s being sold on every street corner. We do know that legalization results in greater use.”

At Burning Man, this attitude may manifest as drug testing all drivers for any level of marijuana in their systems and/or arrest of those caught using the drug by patrolling law enforcement. Why Burning Man and not any one the many establishments currently selling the drug for recreational use across the state? Because Burning Man happens on land that is owned and patrolled by the federal government, so though it is technically within Nevada borders, it is not subject to Nevada state law when it comes to marijuana use. Traveling outside of Black Rock to use the drug won’t help the legal status of the action either, as Nevada prohibits use of marijuana in public places.

You Can Stay Sober at Burning Man

If you are in early recovery – even in the first few years of recovery – or if you are not currently feeling strong in your ability to stay sober, Burning Man is not the place for you. Legal or not, heavy drug use happens at all hours of the day and night, and all around you. You will see it, you will smell it, and you will be offered substances. It is not recommended that those in recovery go to Burning Man unless they:

Did you attend Burning Man this year? Are you planning to go next year? How will you protect your recovery?