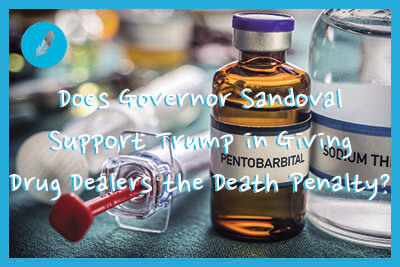 Trump recently got into specifics when discussing his plan for addressing the opioid epidemic that is killing tens of thousands of Americans every year. He promised to make changes that would give us a drug-free generation of children – changes that included prevention efforts, law enforcement, and imposing the death penalty on drug dealers.

In Manchester, New Hampshire, Trump said: “If we don’t get tough on the drug dealers, we are wasting our time. And that toughness includes the death penalty.”

Attorney General Jeff Sessions reportedly backed up these assertions by sending out a memo to US attorneys in which he listed drug-related statutes where the death penalty should be sought. In addition to shooting deaths that occurred in the process of a drug trafficking crime, racketeering crimes, murder that occurred in the context of criminal enterprise, and cases “dealing in extremely large quantities of drugs.”

Sessions is also reported as saying, “I strongly encourage federal prosecutors to use these statutes, when appropriate.”

Republican Governor Brian Sandoval released a statement in support of Trump’s speech and his goals for managing the opioid crisis, saying: “I applaud today’s opioid initiative announcement by President Trump. Nevada has and continues to aggressively combat the prescription drug abuse epidemic and today’s announcement compliments our state’s efforts. The announcement will also help Nevada in building on our efforts to provide the critical resources necessary to combat this disease in our communities.”

While it is not clear what exactly it was in Trump’s speech that Sandoval believes will be translated into tangible support for Nevada families in crisis due to addiction, it does seem clear that he is on board with the idea of pursuing the death penalty for drug dealers in certain cases and sees the initiative as being in line with current legal efforts.

On the other hand, not all of Nevada’s government representatives are in line with the approach outlined by Trump when it comes to the opioid epidemic. Senator Cortez Masto released a statement stating: “There is no evidence that threatening suspected drug traffickers with the death penalty will do anything to alleviate the conditions that are causing the opioid crisis. Our focus must be on how we can treat victims and work in our communities to stop, treat and prevent more needless deaths and suffering. I stand ready to work with my colleagues to take meaningful action to confront this public health crisis, including ending the overprescribing of prescription opioids, adequately funding treatment and prevention programs, and by making sure our first responders have the training and tools necessary to save lives.”

Senator Masto’s focus seems to be more in line with that of the substance abuse treatment, mental health treatment, and medical communities: Treatment is the only evidence-based method of proactively addressing addiction. Criminalizing the disorder only makes matters worse.

While the medical and substance abuse treatment professionals support the notion that treatment is the best path forward, people in recovery also point out that things are not as simple as Trump seems to think. Drug dealers are not always the shady boogeymen that the movies once made them out to be. Sometimes the person who supplies the drugs is another addict, an elderly person with extra unwanted painkillers to sell, or a concerned family member who does not understand the risk in providing money or drugs of any kind to someone living with an addiction. These are not people who should be looking at the death penalty or potentially any criminal prosecution. Instead, these instances of drug dealing indicate a lack of general understanding among the public about the danger associated with legal painkillers or a need for treatment that helps the whole family to recover from a loved one’s active addiction.

What Is Your Response?

How do you feel about how the federal government is progressing in handling the opiate epidemic? What are your thoughts on how your representatives in Nevada government are going to bat for you and other families that are in crisis? Do you think that drug dealers should face the death penalty and, if so, in what cases would this approach be deemed appropriate?