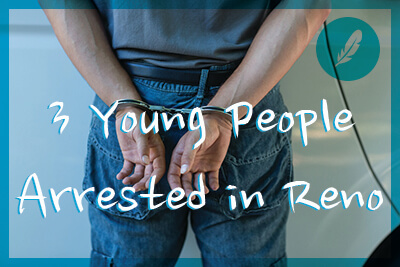 Three young adults were arrested in Reno this month on an assortment of drug-related charges. Ranging in age from 19 to 26, the three people were apprehended by the Nevada Department of Safety’s Tri-NET Narcotics Task Force in conjunction with the Regional Street Enforcement Team. In the course of the investigation, law enforcement seized substances including cocaine, heroin, ketamine, MDMA, LSD, psychedelic mushrooms, and prescription medications as well as child pornography and more than $9,000 in cash.

This investigation is ongoing and will likely lead to more arrests and drug seizures in the process.

All those arrested in this drug bust were under the age of 30, young adults including a teenager who are just starting out in life. While it may be easy to dismiss their arrests among many that are happening across the state and country, it is important to pause and consider all the potential benefits of the situation. For example:

For more than 25 years, Nevada drug courts have been successfully helping people arrested for nonviolent, drug-related crimes avoid a prison term and instead connect with treatment that will help them start over. With the option of a clean slate, many enter a drug rehab program when they might otherwise have never asked for help, stop using all substances, and learn how to stay sober for the long-term. With a case manager and a public defender to assist and encourage them, and a judge who supports them in making positive decisions, it can be the first time they have had a positive interaction with someone in authority and begin to see how easy it is to stay on the right side of the law. The benefits of having a strong support system as a young adult and/or in recovery cannot be overstated. For many, the Nevada drug court system provides the level of follow-through on expectations that can be hugely helpful to young people who otherwise feel rudderless in their new adult lives.

Treatment Is the First Step

For anyone living a life that is driven by the use of substances and having a hard time making positive choices as a result, enrolling in treatment is the recommended first step. Because substance use disorders are medical in nature, medical intervention is necessary in order to make impactful change – that is, changes that are sustainable and foster a lifestyle based on health and wellness in sobriety.

Comprehensive treatment that addresses all co-occurring issues – mental health symptoms as well as trauma, cravings, and lifestyle issues that may be driving the use of substances – is the best choice for those looking to build a solid foundation in recovery. Is it time to step up and intervene in the life of someone you care about who is struggling with addiction?