Is Illegal Marijuana Still a Problem in Nevada after Recreational Legalization? 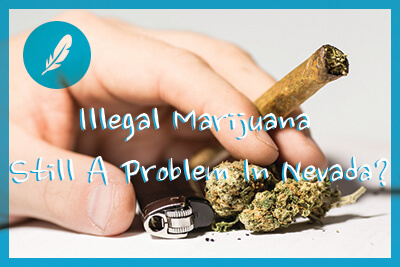 As Nevadans adjust to the legal sale of recreational marijuana as the norm, many are looking to see what changes, if any, are developing as a result. Groups and politicians that were working for the legalization of the drug claimed that tax income would go up and crime rates would go down.

Though it has not been long enough to make any definitive determinations based on the legalization of recreational marijuana, especially as it pertains to tax income, many are paying attention to the news to see if crime rates drop as promised by campaigners for legalization, or go up as promised by those who worked hard to stop the law from passing. Here’s what we know.

One Nevada woman was arrested this month after a routine traffic stop in Nebraska when she was found to be allegedly trafficking almost 60 pounds of marijuana worth an estimated $295,000 on the street.

In another case a couple of months ago, officials raided an illegal marijuana farm on national forest land in the Railroad Valley and seized more than 2,300 marijuana plants.

While possession charges are likely considerably lower now that it is legal to have a limited amount of marijuana on hand, it is clear that there is still large-scale criminal activity happening with marijuana. It may be that drug traffickers are taking advantage of the legality of the drug and shipping it to states where it is not legal for recreational use. Or it may be that the price point for legal recreational marijuana is so high that there is still a market for the drug on the street. Whatever the reason, so far, there is little indication that gangs or drug traffickers have closed up shop as a result of the legislation.

The Drugged Driving Issue Has Not Been Addressed

There is no “breathalyzer” tool to determine whether or not a driver is under the influence of marijuana like there is for alcohol – at least not that is portable and easy to use. There is a machine that can be used to determine whether or not someone has marijuana in their system, but a blood test is needed for levels to be determined. Few counties own these machines, and if they do, they must be utilized at a checkpoint station.

In other words, there is not yet a viable way to determine whether or not someone is under the influence of marijuana when they are on the road, and it is a serious problem. Drugged driving endangers the driver, their passengers, and everyone else on the road, including pedestrians. Marijuana was the second most commonly found drug in a driver’s system at a DUI accident and that was before the recreational legalization of the drug in so many states across the country.

No matter what its legal status is, research shows that marijuana is an addictive drug. An estimated 30 percent of those who use marijuana regularly are living with a substance use disorder as a result of their use of the drug. It is neither harmless nor safe simply because it is a plant and therefore “natural.” It is being bred carefully to have increasingly higher and higher THC content levels – the active ingredient that produces the high – such that it is a very different substance than it was 10 years ago, much less 20 or 50 years ago when it first gained popularity among young Americans in the 1960s. The perception that there is no harm in using marijuana has increased in the US over the past decade in direct correlation with the increased legislative push to legalize it recreationally.

What has been your experience so far with the legalization of recreational marijuana in Nevada? Have you noticed any changes in your community, in your family, or among those who already tended to overindulge in alcohol or other substances? What are your expectations in terms of crime rates and marijuana legalization? Do you think we will see more crime in Nevada, less, or that things will stay pretty much the same?