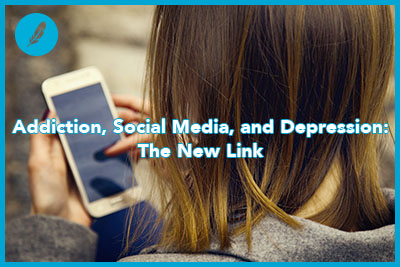 Scrolling through posts on Twitter, Instagram, Facebook and other social media accounts is the norm these days, but for some, heavy use of social media has been shown to increase feelings of jealousy and discontent among users. Because most put their “best foot forward” online, showcasing their happiest moments and biggest accomplishments, social media use can feel to some like a nonstop demonstration of how mediocre life is in comparison to the barrage of others’ achievements.

Another study published in the journal Depression and Anxiety demonstrates that there may additionally be a link between depression, heavy social media use, and addiction. That is, participants who reported spending more time on social media during the week were more likely to be living with depression as compared to those who spent less time engaging with social media. Addiction was found to explain a large part of the effect of social media use on the development of depression.

Lui yi Lin was a researcher on the study, and in a news release, said: “It may be that people who already are depressed are turning to social media to fill a void.”

What Is ‘Normal’ Use of Social Media?

But does that constitute “normal”? Many check in with social media sites daily or a few times a week, while still others have their settings alert them when certain people or topics are posted, and check in every time it goes off – which may be once or twice a day or 100 times a day.

Additionally, it is important to keep in mind that everyone is an individual. That is, the level of social media use that is “normal” for you and does not impede your sense of wellbeing or your ability to function may constitute “too much” or “addictive use” for someone else. As yet, there have not been any studies done to quantify the use of social media sites and determine how much is too much in general and when use of social media may begin to border on problematic.

It is interesting to note that researchers cited a need to “fill the void” as the driving force behind the link between depression and social media use, especially when a link with addiction was also cited. Many in recovery from addiction say they turned to drug and alcohol use as a way to “fill a void” as well. It would be interesting to learn how often it is that people combine the two (e.g., drinking and scrolling through social media sites at home alone) or use one to replace the other (e.g., spending hours on social media rather than getting high).

Similarly, many who struggle with a shopping addiction report that they often make unnecessary purchases in an attempt to “fill the void,” as do those who repetitively seek out unhealthy sexual and romantic attachments or engage in other behaviors that can have negative consequences when engaged in compulsively.

With a little more research and increased understanding of addictive behaviors of all kinds, we may better be able to provide treatment for those struggling with these disorders individually or in combination.

Ariel Shensa was a coauthor of the study. She told Reuters: “We believe that at least having clinicians be aware of these associations may be valuable to them as they treat patients with depressive disorders. For example, they may wish to inquire about social media use patterns and determine if those patterns are maladaptive.”

Research studies like this one that provide increased insight into the function and structure of different mental health disorders within the context of cultural changes can be of huge benefit to clients in recovery. If there is a mechanism of maladaptive behaviors or issues that goes unaddressed during treatment, then this mechanism may be more likely to trigger relapse in recovery.

For example, in the case of treatment for an addiction disorder, someone may be living with high levels of stress at home, and that stress may be contributing to the use of drugs or alcohol. If home life is not addressed during treatment, then when the person returns home, it is likely that relapse will occur because a significant factor driving use of drugs and alcohol did not change.

The more we understand the different life situations, circumstances, and factors that can contribute to addictive behaviors of any kind and mental health disorders, the better equipped we will be to treat the problems.

No matter how depression manifests, when the disorder co-occurs with addictive behaviors of any kind, comprehensive treatment is recommended. Whether the addictive behavior is drinking or drug use, heavy social media use or use of other technology, gambling, unhealthy relationships, shopping, or disordered eating, it is imperative that the person seek treatment that can effectively address all behaviors that contribute to the symptoms of depression and cause negative consequences.